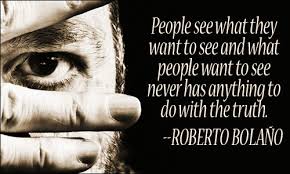 Perception is the organization, identification, and interpretation of sensory information in order to represent and understand the environment. All perception involves signals in the nervous system, which in turn result from physical or chemical stimulation of the sense organs. For example, vision involves light striking the retina of the eye, smell is mediated by odour molecules, and hearing involves pressure waves.… [Click to read the rest] “The War on Perception: To Win or Lose It!”

(Being outrage on something is not confined to Islam and Muslims alone. Everyone has a right to protest and be angry if anyone belittle and insults one’s beliefs & faith but there must be a sense of reasonableness and fairness too. Have you done the right things and be fair to others?… [Click to read the rest] “Random Thoughts 101: Be Outraged But Be Fair Too”

(Race based policies are as just as bad and cruel as open segregation of society and citizens based on the colour of their skin seen here in an early 1930s photo. Image source: http://www.old-picture.com)

(Never underestimate the power of impressions, more so if it was handled by professionals. Image source: https://iheartintelligence.com)

One of the few best things that BN under Najib did in 2010 (although it was long, long overdue) was getting a new President for MIC but then again, MIC is old news and the old President did not go away with empty hands.… [Click to read the rest] “2010 Reflection: Year of the BN”

Interesting comments from an unlikely source:-

Nazri also came to the defence of the non-Malays, claiming that they never questioned the rights of the Malays.

“It is not true that the non-Malays question the Constitution.

A snapshot from my RSS feeder – are we segregated by race or country? Interestingly, the second feed seems contradict the last feed. When we will be truly 1Malaysia?

(It is better for us if we are more united as a country instead as a specific race, controlled by political party. Image source: http://www.archives.gov)

Frankly I have not been following up on MIC lately – after all, it is nothing but a “gone with the wind”, one man show political party.… [Click to read the rest] “United for what?”

An interesting conversation that took place on 1Malaysia:-

The biggest laughter came with the final question from Khairy, who asked half-farcically: “Now, tell me, is 1Malaysia the best thing that ever happened since Merdeka?”

(Najib’s NEM – looks good on paper but will it stick in reality? Can Malaysians afford to make that leap of faith with Najib’s ideas and face the world?)

Najib have just launched New Economic Model (some says identical to Pakatan Rakyat’s economy model) which supposedly replaces the New Economic Policy.… [Click to read the rest] “What so new in NEM?”

(Controlled racial profiling for key statistics and census is necessary for the Government to review it’s policies and make improvements. Image source: http://static.howstuffworks.com)

And I think both Kadir Jasin (who is arguing for a stay of the race box in the official forms) and Ktemoc (who replies on why such race box in official forms need to be abolished) have valid points.… [Click to read the rest] “1Malaysia & Race Box”